‘Blink’ first aired on 9th June 2007 and has since received critical acclaim, with many people labelling it as one of the best episodes of the ‘New Who’ series. The episode starts ambiguously, we have no idea where the Doctor and Martha are or who the new monsters are. We certainly don’t know anything about Sally Sparrow, the woman who takes the forefront of this episode. Written by Steven Moffat, the episode contains an almost effortless script as we move from scene-to-scene. Alongside this, subtle jokes are made throughout the episode, with a reference to the growing online culture and the modern perspective of Doctor Who itself.

We meet Sally Sparrow (played by Carey Mulligan) as she explores the abandoned house of Wester Drumlins, showing no fear while she does. This is a characteristic we are used to seeing from the Doctor: a strong sense of curiosity and the ability to see the beauty in things that perhaps other people don’t. With the Doctor and Martha stuck in 1969, it is up to Sally Sparrow to save the day and to provide the audience with a brand new style of episode that had never been done before in ‘New Who’ and perhaps never will again.

Throughout the episode, we encounter various different characters acting as ‘companions’ for Sally Sparrow, almost like the Doctor. Firstly, we meet her best friend Kathy Nightingale who sadly gets transported out of 2007 by a Weeping Angel early on in the episode. We then meet DI Billy Shipton, who provides us with a comedic factor while also making the audiences aware of the tragedy of the Weeping Angels as he eventually ends up in a similar position as Kathy Nightingale. Even if it had ended up being short-lived, his possible future with Sally is ripped from him. Although Billy and Sally meet again, it’s a bittersweet and final reunion. Once again, parallels can be made between this and the Doctor. Throughout the entirety of Doctor Who, the Doctor has had his fair share of bittersweet moments especially through the loss of his companions. Take for example, Rose Tyler who is sucked into a parallel world and away from the Tenth Doctor before the chance arises for a proper goodbye. They meet again of course, on Bad Wolf Bay; yet that same sense of a bittersweet ending hangs in the air, as we watch Rose and the Doctor say goodbye to all of their possible tomorrows together. 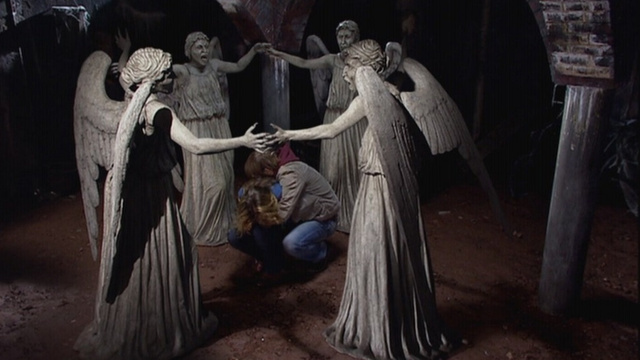 Sally Sparrow soon moves on to her third companion of the episode: Larry Nightingale, the brother of Kathy Nightingale. It is here, that Sally finds her consistent companion. Larry enables Sally to draw the links between the seventeen DVDs and the Doctor himself whilst representing the audience’s confusion with his inquisitive behaviour. For me, the beauty of the episode and the reason as to why it is so loved is the perfect ratio between hilarious, terrifying and heartbreaking moments. Through Larry and Sally’s dynamic, we are able to appreciate all three of these elements. He brings in the hilarious one-liners (‘“The angels have the phonebox,” that’s my favourite, I’ve got that on a T-shirt’), the terrifying moment as he comes face-to-face with a Weeping Angel and our hearts break as we watch him try to pursue a romantic future with Sally at the end of the episode.

Despite the Angels making numerous further appearances throughout Doctor Who, nothing quite beats Blink. Perhaps, we can put this down to the concept of the Angels being more terrifying when we know less about them. Or perhaps, it is plausible to suggest that when it comes down to Blink, it isn’t the Weeping Angels that make the episode. It is Sally Sparrow herself. She uses her integrity (‘I’m clever, and I’m listening. Now don’t patronise me, ’cause people have died and I’m not happy. Tell me.’) and her bravery in order to pull the episode forwards; ultimately ending in her saving the day, not just for the Doctor and Martha but also for the future of Doctor Who itself. It is an episode that continues to be considered as the best episode of Doctor Who, even now as it reaches its tenth birthday.

For me, Sally Sparrow is more than the companion that never was. She is proof that there is no reason why (with good writing) a female Doctor wouldn’t work.